As the domestication of the dog has become increasingly popular in the last hundred years (having dogs as pets really exploded in the post World War II era as the United States transitioned into a more suburban culture) so have various training techniques for making companion animals the best pets that they can be. Ensuring that your dog is a healthy, happy one requires a holistic approach of a good home environment that includes significant bonding time and attention, exercise, a healthy diet and behavioral training and structure to allow the animal to live comfortably in a human household. While there are many different training techniques, each with their own strengths and weaknesses and philosophical supporters and detractors, all are based on modifying a dog’s behavior by motivating them to achieve a particular result. 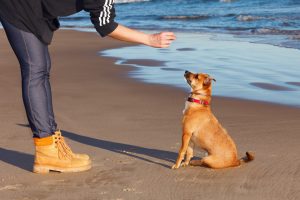 Clicker training is a form of motivational/reward training that uses a sound, rather than a physical reward (like a treat, toy or attention). While we refer to it as clicker training here because that is the most common form, a variety of tools can be used – from a clicker to a whistle to a specific word. The idea is that the animal associates the sound with pleasure, just as they would in the motivational/reward training paradigm. In clicker training, the dog is first taught to associate the sound of the click with a positive feeling, typically by giving a treat every time they hear the click. Once the association of “good” is made with the sound of the click, the sound is used as the positive reinforcement method in training. Experts believe that using a clicker allows reinforcement to be delivered more quickly and more precisely than with other reward methods.

Shock training, also known as electronic training, is a type of reinforcement training that focuses on correcting negative actions rather than rewarding positive ones. This type of training typically uses a collar that delivers a small shock to “correct” a behavior (such as picking up a forbidden item, not obeying a command or crossing an invisible fence line). Other types of electronic training also fall into this category, such as collars that emit a sound, a puff of compressed air or a negative smell. Shock training and focusing on negative behaviors is controversial in terms of its humanity and suitability for household pets as some believe that it diminishes a dog’s compassion and may encourage more aggressive behavior.

Pack based training has become a popular theme among dog training media personalities in recent years, however, it is also becoming increasingly discredited. The idea is that because dogs come from wolves, they are biologically predisposed to act in a “pack” hierarchy with a defined leader who makes decisions and followers who do what they are told. In pack-based training, the idea is that the master must establish themselves as the leader and the dog being trained as the follower. There are two problems with a strict pack based training scheme. First, research has shown that wolves don’t necessarily live in a pack where they fight for leadership positions, but rather in a nuclear unit similar to a human family and follow the direction of their mother, father and ranked birth order. Second, in a pack mentality, their is a constant fight for leadership of the pack and over resources (such as food), so such a training scheme may likely provoke aggressive behavior. Recent research has shown that dogs respond much better to opportunities for independent decision making rather than aggressive rank order commands.

Observational training, known more clinically as “model-rival” training teaches by example. This training philosophy is based on the thought that dogs are observational learners – that they look to others and follow their example. In this type of training, the dog being trained is presented with rival that challenges the trainer for attention. The trainer encourages the rival to complete tasks – to fetch a ball, for example, allowing the trainee dog to observe this behavior and compete for the opportunity to participate and mimic the behavior. 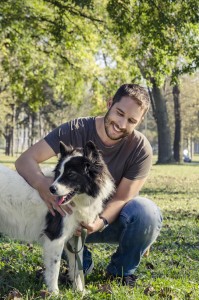 Relationship-based training may very well be the holy grail in dog training. This type of training doesn’t focus on any one particular paradigm as a sole resource for training the animal. Rather, relationship-based training ensures that the animals well-being is the highest priority (they feel safe, have a good home, are well fed and cared for, et cetera) and then uses a  combination of the above training schemes where appropriate. This method focuses on the relationship between the dog and the trainer by developing ways to effectively communicate using that relationship, controlling the environment to limit opportunities for negative behaviors and truly understanding what motivates and rewards the animal (for example, treats, play time, attention, et cetera).

In sum, there are many different training paradigms that have become popular in conditioning the behavior of dogs. Different training experts, coming from different backgrounds or schools of thought, often believe that one method is superior to others. Research seems to indicate that no one method is perfect and that a combination of various methods, adapted to the specific animal’s personality and needs may be the best approach. One thing has become clear in recent years, positive correlation and reward based training is certainly the best approach for developing a happy, non-aggressive animal with a strong sense of well-being and good house manner.